The ‘Open' Tower of Babel 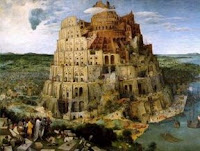 Here's a reality check on the regional desktop localisation efforts. According to the Bible, there was a time when all those on earth spoke one language. And humanity, united by one language, started building the Tower of Babel to reach the heavens and discover the ultimate truth. As this was open defiance against God's wishes, He thought that the best way to stop these efforts would be to create confusion between humans by making everybody speak different languages so that no one could understand each other. Soon, humans could no longer communicate with each other and the work halted. The Biblical myth ends with the tower being left unfinished, and mankind's dream of reaching the heavens effectively thwarted. "The confusion of tongues" created by a Biblical God has been preventing knowledge decentralisation even today. And this very confusion has also become a barrier in the process of actual penetration of IT, as more than 80 per cent of the population of the world speaks a language other than English. But in the world of open source, GNOME and KDE are serving as the ‘open' tower of Babel. GNOME and KDE are the two most popular desktop environments and are available in several languages. Today they are eroding the layers of the "confusion of tongue" by helping to create desktops in the languages people can understand.

GNOME 2.16 has just been released. Dzongka, Hebrew, Indian Bengali, Latvian, Malayalam, Norwegian Nynorsk, Slovenian and Tamil are the new languages supported in this latest version. Also noteworthy is the support for British and Canadian English. Among the languages of the Indian sub-continent that were already supported are Indian English, Gujarati, Hindi, Nepali and Punjabi. Marathi, Oriya and Telugu are also moving towards being supported. Do not be surprised by two versions of Bengali, Bengali (bn) and Indian Bengali (bn_IN). This is the result of the choice and freedom that open source offers to its communities. GNOME 2.16 is the world's first desktop release that features support for the Unicode Character Database (UCD), version 5.0, which defines more than 99,000 characters for the languages of the world. The improvements are built into GNOME libraries GLib and Pango, and are thus available to all other open source and free software projects that use these libraries. Some Indian regional languages are spoken by more people than the national languages of certain other countries. Sixteen of the top 70 global languages are Indian. GNOME and KDE ‘open' desktops are available in several languages. With more and more computer users shifting towards Linux, the demand for localised interfaces has gone up for non-English speaking users. The power of IT is coming to people in their own language. It is very exciting, but not a simple task at all. Translating the whole GNOME desktop is no mean task. There are 32715 strings to translate in GNOME 2.16. For GNOME 2.16, if you take a look at the status page, 119 languages are listed as being supported by the GNOME project. This statistic is mind-boggling. No commercial project can even think of localising as many languages as GNOME and KDE support.

KDE started translating itself before KDE 1 was released. And since then, KDE has added new languages every year. KDE's I18n (internationalisation) team leader, Stephan Kulow says, "In 1999, we had only 34 languages; in 2003 we were with 74 languages and today we have 88 languages." He also adds, "For KDE, translations are very important as many users do not speak English well enough to understand the interface without translation. KDE does not select languages, the translators of a language select KDE." This is the main advantage of open source. Commercial projects select languages on the basis of market share and profit, but KDE takes what it gets from contributors. Hindi, Tamil, and Punjabi teams have done wonderful work in translating KDE. Gujarati, Marathi, Bengali and Kannada are registered at KDE but these teams are not so active nowadays.

IndLinux has long been working on GNOME and KDE L10n (localisation). While steering the Hindi effort, it has also helped start Gujarati, Punjabi and many others. Even Nepal and Bhutan used IndLinux expertise to train their teams for localisation. The progress of the Nepali language on the GNOME L10n front has been very impressive. But the main force behind IndLinux- Karunakar-is not very satisfied with the progress of the recent localisation efforts. He feels that for the past one year, not many new translations have been added; existing ones have been updated or maintained. He stresses the need for a review workshop. Due to initiatives by Sarai and IndLinux, review workshops for the Hindi language have happened twice but most other languages lack this important aspect of localisation.

Hurdles in the path

The key to judging any language translation is its comprehensibility and consistency. Localisation of a desktop should be done according to the users' point of view. So without the review of the localised desktop of GNOME and KDE, it is not possible to get the entire benefit. Therefore Karunakar feels that the effort needs addressed first," asserts Ratlami. He goes on to add, "What we've addressed is only the tip of the iceberg. There are hundreds and thousands of things to be done in each and every Indian language." He gives the community a shot in the arm when he says, "The community has achieved something big with so little resources." According to Ratlami, KDE is definitely better, well thought out and well designed. Ravikant of Sarai has a very strong rationale for the availability of most linguistic projects on open source, "From its very inception, Sarai-CSDS has been inspired by the debates and practices around free software. We believe that these debates are crucial in understanding and interrogating the property regimes, the new form of which we encounter in the shape of ‘Intellectual property'. The licensing In the world of open source, GNOME and KDE are serving as the ‘open' tower of Babel. GNOME and KDE are the two most popular desktop environments and are available in several languages. more volunteers, more translations and more feedback from users. But unfortunately, that has not been coming in a significant way. "Localisation is one activity that has a low entry barrier, where anyone can get into the FOSS development. While it may seem a monotonous task, it can be very enriching in the long run and help preserve the language in the digital age," says Karunakar. Ravi Ratlami, one of the Indic language pioneers in open source localisation efforts, stresses on the need for some common funds to attract volunteers to do translations. "This job is very boring, non- glamorous and thankless in India. It must be compensated for in various ways. Also, there still exist several problems related to Unicode, Inscript or Font, that the community faces during translating anything into their mother tongue. These problems are of prime importance and should be procedures that challenge the dominant norm established by EULA are good for poorer societies like ours. Free Software is also the way to go for localisation, for globalists- induced localisation is on the whole market driven. The market typically supports languages that have big user-bases with a legacy of linguistic resources at their disposal. I believe that this digital moment is the one to grab if the languages that missed the print-technology bus want to revive themselves. It is easy to generate, store and circulate content in practically any language, even the ones that do not have a script. So smaller linguistic communities do not have a choice other than embracing free software, which allows for any number of modifications and adaptations across languages."

Talking about the government attitude towards open source software and desktops, Ravikant quips, "My views about the government's attitude towards either open source or localisation are far from charitable. For one, hefty corporations like Microsoft have a foothold in the highest echelons of power in the country. If Bill Gates dines with the prime minister, the media gleefully reports the meeting as if Windows is the only computing reality. Second, the government actually spent a great deal on local solutions, but its model was an old bureaucratic one. It allowed small companies to play with forms and formats, resulting in anarchy of fonts and standards. This delayed the localisation process considerably in India. Third, the government also made the mistake of creating solutions with expert-driven methodologies, and it tried to earn money on what could be popular solutions. The result is that people refused to buy redundant software like Ileap. You can also see that even Microsoft had to launch community portals for its language solutions." That is where Ravikant and several others believe that free software is invaluable-you have the opportunity of catching and correcting errors and bugs all the time. Ravikant adds that the Indic solutions from the Indlinux group of volunteers-which Sarai has been a part of - is far superior, more creative and on the cutting edge than any other efforts. He complains that they have approached the TDIL and CDAC more than once to use software that is freely available in the public domain, but the organisations do not evince any interest.
The hope still lingers

In this age, information is power. The quality and quantity of information that we have decides how powerful we really are. The quality of localisation is heavily dependent on the community. That is one reason why some proprietary companies have also launched community portals for their language solutions. But the community working for them is not the real community. The real one is the open source community, where power lies with the community itself. Punjabi localisation enthusiast Amanpreet Singh Alam is very positive about the success of open source desktops, "If common people start participating in any war, then it is impossible for any army to defeat a country and its people. So is the case with free software and open source versus proprietary software. Eventually, the peoples' desktops- GNOME and KDE-are going to win." And once the construction of the ‘open' tower of Babel is over, the knowledge of IT will be available to everyone, irrespective of commercial benefits.

I found this site using [url=http://google.com]google.com[/url] And i want to thank you for your work. You have done really very good site. Great work, great site! Thank you!